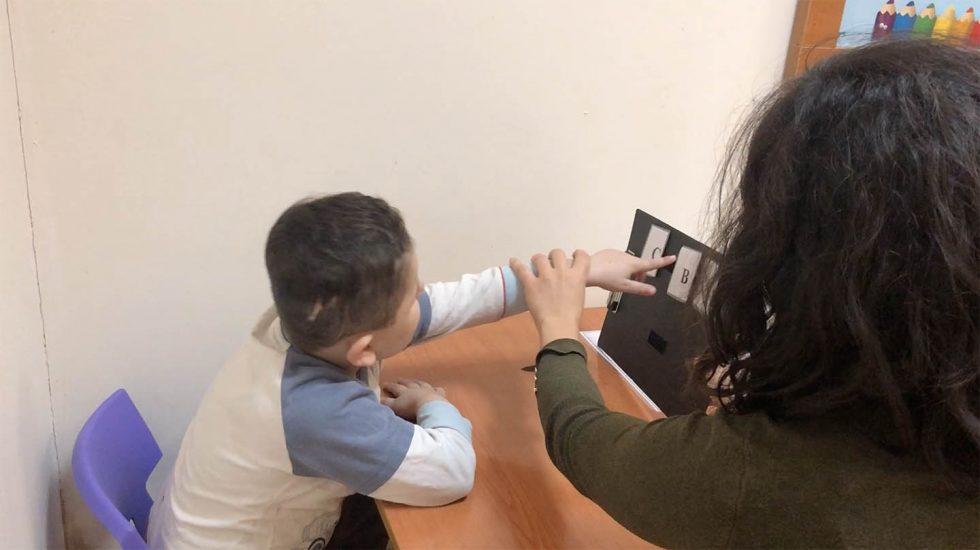 Six months ago, everyone greeting Samer would be rejected by a simple “I don’t like you” and “leave”. Day by day, as we passed by SKILD’s multi-sensory room to get to the offices, we noticed Samer’s improvement. From one-word rejection phrases to conversation sentences about anything that interests him, the daily chat with Samer grew from a few seconds to a few minutes. Samer joined SKILD’s Applied Behavioral Analysis (ABA) school with high rates of problem behavior including aggression and tantrums which involved screaming, pushing away materials and breaking them, and using aggressive expressions.

After expressing his feelings with aggression, Samer is now able to use 3 to 5-word phrases to express sadness or fatigue. Instead of saying “leave” and “I don’t like you”, Samer now gently tells his friends and educators that he needs space and will talk to them later. If he is in a non-verbal situation, Samer uses his picture flashcards to express himself.

Since the beginning of April, Samer has had zero tantrums!

From an academic standpoint, after 6 months of intervention, Samer mastered all the objectives set for him for the first period based in the assessment of basic languages and learner skills tool. He can now independently request preferred items in Arabic, count to 10 in English, dress independently (pants, shirt, and shoes), and wash his hands.

The purpose of the ABA school is to enhance the behavior of children whose difficulties get them expelled or not even accepted at schools so that they can go back to mainstream classrooms with minimal assistance.

Help us secure equal learning oppurtunities for children with learning difficulties by supporting us from the US, UK, & Lebanon.

Find out more about our ABA Program, who can benefit from the sessions, and how the program can help your child.

Daniella joined LSESD in 2018 as Partner Relations Coordinator for SKILD and has since then been dedicated to developing SKILD’s resources and capturing the meaningful and impactful moments to share with SKILD’s partners. Daniella has a BA in Political Science from Haigazian University.

Coping with Our “New Normal”- Part One

What do you think about screaming moms? Part2

Let Consequences do the Screaming! I have always made jokes on myself that I resemble…